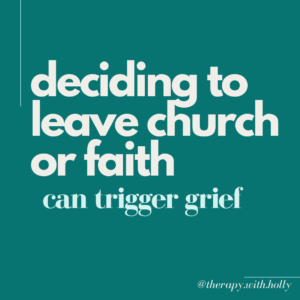 ‘deciding to leave church or faith can trigger grief’

Deciding to leave a faith community can really feel like you’re pulling the rug out from under yourself.

It can cause grief, a sense of loss – of the community, and also part of your identity.

Here are some things that have helped other people:

Connect with other people.

Connect with a therapist (hi! it me). (See also: drariellemarston.com).

Most importantly, connect with yourself. Take some time to find out what your needs are apart from the group you left. What do you like doing, because it’s interesting, relaxing, rewarding, or just silly and fun? Find ways to do more of that. And if your fun things involved the group you left – uh, cry about it if that’s what comes up. Leaving a community is like a group breakup. No wonder there’s anger and sadness and wondering ‘what if’ but also relief, and then maybe guilt for being relieved?? Grief is a constellation of emotions and thoughts, and it doesn’t always make sense. It can be helpful to treat big feelings like upset kids who are suspicious of us – the more we can just hang with and get curious about weird/dumb/annoying/inconvenient/heavy emotions, the more relieved we are of them, and the more they begin to make sense (or the less we need them to make sense).

If your goal is being able to set a boundary without guilt, that’s a great goal! Spoiler alert, though: it’s a goal that probably won’t be met the first time you give it a go. Which is very normal.

Probably, you’ll have to go through a few steps. Maybe…

you’ll set a boundary, and not feel guilty.

You will have set a boundary without feeling guilty.

Bitch is in the eye of the beholder.

I hope you get the drift, but as we therapists like to say, humans aren’t mind readers, so I’ll break it down rather than assume you can read my mind.

Okay, the saying is technically “beauty is in the eye of the beholder.” It means that whether something is considered beautiful varies depending on who you’re asking. I might think mountains or Adam Driver are ugly, but you might think they’re gorgeous. And you’d be right.

Have you ever had the experience of asking for something to be done, or stopped, and someone gets mad about it? Maybe they say you’re blowing it out of proportion. Or like a lot of my clients fear, maybe they’ll think you’re a bitch. Well, I I have a different perspective to offer: if setting a boundary makes you a “bitch,” so be it.

To use myself as a hypothetical, if someone tells me that I’m wrong, that the sky isn’t blue but is, in fact, twelve!- guess what? That doesn’t make the sky less blue. They can think the sky is twelve all damn day, and that doesn’t change the fact that the sky is blue, or at the very least that my (and generally most people’s) retinas perceive it as blue (side note- in a way, color is technically “not real” because color depends on how our eyes perceive the light waves that make the color, but that’s a different story. Ask Dr. Sobel in the UCA psych department about it).

Good question. The amount of closeness and safety I have with people varies greatly. I have close-knit friends that are truly in my “inner circle,” and I have acquaintances I like to hang out with sometimes but we aren’t necessarily so close that I’m going to call them to rant about a bad day, and there are people who I’ve maybe passed on the sidewalk but would never think twice about what they think of me.

Now, let’s say I need to set a boundary that protects my time and energy because I’ve been feeling way too busy, for example. A person who gets pissed that I won’t go out with them or go pick up their dry cleaning or [other example], may not belong in my inner circle! Perhaps their getting mad is a one-off, and we can talk about it. That’s fine. But for a lot of my clients, they worry about (and sometimes have actually experienced) people in their inner circle getting really bent out of shape when my clients have needed or tried to express their boundary. They feel they can’t do anything about it because, well, the other person got mad. And they “don’t want to be a bitch!”

If setting boundaries is new for you, it might feel super uncomfortable. You might feel guilty or ashamed. It’s okay to feel these things! Let them ride. Sometimes new stuff is painful. Remember being a kid, and GROWING? That shit hurt. They literally call it “growing pains.” Your bones are getting thicker, stronger, longer- and it’s not cozy! But if we didn’t grow, … we’d be …. I mean, a world full of infant-sized adults, basically? Talk about never getting anything done.

The same applies to the growth that happens when you practice saying out loud what you don’t like, can’t do, or won’t tolerate. It can be painful, and it’s okay if it is. But you’ll get there, and unless you’re smacking people or name- calling in the process like you’re on a reality show, then guess what? You’re not being a bitch.

Bitch is in the eye of the beholder.

A lot of my exvangelical clients want to reach into their metaphorical hearts and rip out all the toxic church bullshit that still lurks in the background. For the most part though, love and hope and similar things were very much a sincere part of their faith – and are still values they want to respect and pursue in their lives. So we approach the process in a similar way that you might manage packing and sorting your house when you move: have a pile for trash, a pile to donate, a pile to keep. As a now-exvangelical, what parts of your former faith feel important to hang onto?

More important, and this can take some time to sit with and sort through, how were those values distorted by toxic elements of faith practices? Many evangelical faiths have a common practice of prying into the deepest parts of people’s private experiences, with an expectation of full transparency and vulnerability for the sake of “accountability” to the church’s standards of how faith should be lived and expressed. Of course, it’s framed as being accountable to Christ, not the church or the pastor (nevermind that the pastor/church and whatever denomination they belong to, are the ones interpreting and teaching the proper standards). This expectation of full transparency with little regard to consent for the individual creates a perfect opportunity for manipulation, forced adherence to standards that often require denial of humanity according to xyz interpretation of an infallible text. Further, the churches often have either zero tolerance for questioning, or a false tolerance for questioning – meaning, the questioning is okay as long as you’re not deviating from the doctrine!

But back to the present-day sorting: It’s up to each individual to determine how they want to sort through their old values. It’s my role as a therapist to help my clients slow down their busy thoughts and create mental & emotional space for understanding what they want to keep. A lot of the time it’s helpful to practice noticing thoughts that come up, and then checking in with any emotions or sensations that come up with the thoughts. Slowing those experiences down and paying attention to the different elements (the thought, the emotion, the sensation, the memory, the mental picture, etc) shines light on their meaning, and gives my clients direction toward deciding what needs to stay in the past and what they want to come with them into their future.

Some examples of things that may need sorting:

Then: previously defined and monitored by your church and its leaders, with an assumption of ‘safety’ built in because it’s church, and built on ‘sound doctrine’ according to a specific interpretation of the Bible.

Now: perhaps accountability would still be helpful – checking in with a friend about keeping a commitment to doing some exercise a few times a week, or reading a book, or about whether you finally had that hard conversation.

Then: service in many evangelical/conservative churches means donating your time and energy toward various church-related activities or ministries. Volunteer for setup, teardown, greeting/ushering, kid ministry, etc. Just don’t forget to be there any time the doors are open! Ready to serve! I once attended a retreat for teenagers where we were taught that if it’s true “service” as God intended, it will be uncomfortable and inconvenient- and if it’s not, then it isn’t service. Lol wut

Granted, this over-giving of time and resources is not at all restricted to churches – it’s common in the nonprofit world in general, as well.

Now: giving your time or energy to causes that you care about is something you can determine on your own, what amount you have to give. You are the person inhabiting your body, in charge of your time, energy, and finances. You decide when and where and how much to give.

Make sense? Cool! Which elements of your former faith are coming with you into the future?